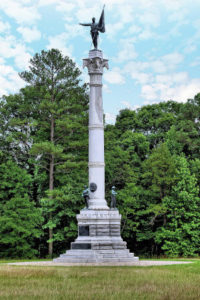 Chickamauga and Chattanooga National Military Park
https://www.nps.gov/chch/index.htm
With nearly 10,000 acres of the preserved landscape around the Chattanooga area, Chickamauga and Chattanooga National Military Park offers a wide variety of things to do. You can take a tour of the park either on your own or with a park ranger. You could go on a hike or engage in a variety of outdoor activities in the park. There are also two park visitor centers where you can explore the park’s story in indoor exhibits. 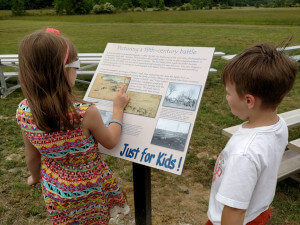 Resaca Battlefield Historic Site
https://www.exploregeorgia.org/resaca/outdoors-nature/trails-tours/resaca-battlefield-historic-site  Walk the six-mile trail of hallowed ground where much of the heaviest fighting occurred at the start of Sherman’s Atlanta Campaign.

Resaca Confederate Cemetery
https://www.exploregeorgia.org/resaca/history-heritage/civil-war/resaca-confederate-cemetery Returning to their land, they found the dead Confederate soldiers still lying on the battlefield area where they fell or buried in shallow graves around their home. Col. Green’s daughters Mary and Pyatt were upset by the sight and decided to collect the bodies and give them proper burials. Mary Green started the Resaca project without any money in July 1866, finished it at the end of October and all debts was paid by the end of December 1866.

Atlanta History Center
https://www.atlantahistorycenter.com/
Visitors have much to see at Atlanta History Center with expansions and new offerings upon the completion of the 23,000-square-foot Lloyd and Mary Ann Whitaker Cyclorama building opening in 2019. The facility is the new home of the massive Battle of Atlanta Cyclorama painting, restored to its intended size at 42 feet high and 358 feet long. It joins the refurbished historic Texas steam engine. 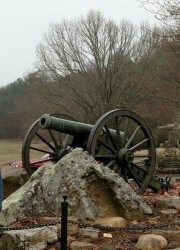 The Marietta Confederate Cemetery came into being in September of 1863. The bodies of men who died during the Battle of Chickamauga were interred in the cemetery after the war.  When you visit here, you will find over 3,000 graves from confederate states and including Kentucky, Missouri, and Maryland. Men who later died in the Old Soldier’s home in Atlanta after the war were the last burials except for one man.  The Old Soldier’s home burials are all in marked graves. 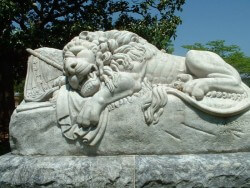 Oakland Cemetery
https://oaklandcemetery.com/
Historic Oakland Cemetery is Atlanta’s oldest public park and the final resting place of many of the city’s most noted citizens. Less than a mile from downtown, its 48 acres are full of treasures – history and gardens, sculpture and architecture, ancient oaks and magnolias. It’s a wedding venue, a green space, an art gallery, a classroom space, and a place to celebrate the city’s rich and fascinating past and future. 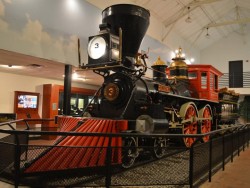 Southern Museum of Civil War and Locomotive History
https://www.southernmuseum.org/
The Southern Museum is a history center dedicated to educating, inspiring, and enriching people about the strategic and economic use of railroads during and after the Civil War.

Sweetwater Creek State Park
https://gastateparks.org/SweetwaterCreek
Sweetwater Creek State Park is a peaceful tract of wilderness only minutes from downtown Atlanta. A wooded trail follows the stream to the ruins of the New Manchester Manufacturing Company, a textile mill burned during the Civil War. Beyond the mill, the trail climbs rocky bluffs to provide views of the beautiful rapids below. Additional trails wind through fields and forest, showcasing ferns, magnolias, wild azaleas and hardwoods.

Cannonball House
https://www.cannonballhouse.org/
The Cannonball House is an 1853 Greek Revival home built by Judge Asa Holt. The house was struck by Federal artillery in July 1864 during General George Stoneman’s Cavalry raid. The house contains the founders’ furniture for the two oldest sororities in the world, Adelphean and Philomathean. In addition, the house has a Confederate military collection as well as other period furnishings. The original brick kitchen and servants quarters still stands behind the main structure. An English garden surrounds the house and kitchen.

Old Governor’s Mansion
https://www.gcsu.edu/mansion
Completed in 1839, Georgia’s Old Governor’s Mansion is one of the finest examples of High Greek Revival architecture in the nation. The Mansion’s history encompasses the antebellum, Civil War, and early Reconstruction phases of the state’s history. Such noted state leaders as George Crawford, Howell Cobb, and Joseph E. Brown resided in the building and used it as a stage for speeches and also to introduce guests of national standing.

A.H. Stephens State Park/ Liberty Hall
https://gastateparks.org/AHStephens
The historic architecture, gently rolling hills, forested trails and placid lakes of A.H. Stephens Historic State Park, once home to the Vice President of the Confederacy and later the ‘boys’ of the Civilian Conservation Corps, now provide you an oasis of natural and historical beauty for recreation, reflection and relaxation. 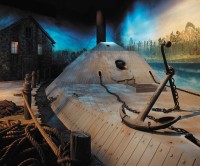 National Civil War Naval Museum
https://www.portcolumbus.org/
Located in Columbus, Georgia, the National Civil War Naval Museum overlooks the Chattahoochee River. They house the most significant surviving Confederate warship, the CSS Jackson, as well as the wreckage of the CSS Chattahoochee. Other exhibits include a replica of the USS Hartford with its berth deck, wardroom and captain’s cabin, an actual cutter or “ship’s boat” from the USS Hartford, a full scale replica of the USS Monitor’s famous turret, and an immersive panoramic dockside exhibit recreating Plymouth, North Carolina, complete with an exterior and interior view of the CSS Albemarle.

The Drummer Boy Civil War Museum
https://www.exploregeorgia.org/andersonville/arts-culture/museums/the-drummer-boy-civil-war-museum
Exhibits at this museum include Civil War uniforms, guns, swords, documents, and photographs. Mannequins wearing 15 authentic Civil War uniforms, both Union and Confederate, including a colorful red and blue New York Fire Zouave uniform and a Union and Confederate drummer boy uniform complete with original drums, dominate the museum. An extensive collection from the estate of Gen. Thomas T. Eckert, president of Western Union and chief of the United States Military Telegraph Department under President Lincoln, is a part of the museum. Included is Mary Surratt’s bonnet, which was removed from her head and given to Eckert just before her hanging, along with others convicted in the Lincoln assassination conspiracy.

Fitzgerald Blue & Gray Museum
https://www.fitzgeraldga.org/blue-and-gray-museum.html
Designed to tell the heart-warming story of how Yankee and Confederate veterans created Georgia’s City of Harmony, The Blue and Gray Museum showcases a rare collection of Civil War relics and artifacts. The Blue and Gray offers a unique way to honor America’s veterans from 1860 to the present. 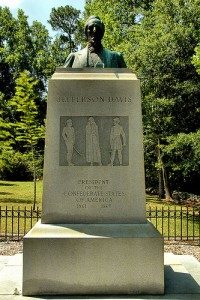 Jefferson Davis Memorial State Historic Site
https://gastateparks.org/JeffersonDavisMemorial
When Confederate President Jefferson Davis and a few remaining staff members crossed into Georgia, they were headed towards Texas, where Davis planned to unite forces to continue fighting. On May 9, 1865, they camped in this pine forest, and at dawn, Davis was taken, prisoner. Today, a monument marks the spot where he was arrested.

Fort McAllister State Park
https://gastateparks.org/FortMcAllister
Located close to I-95 south of Savannah on the banks of the Ogeechee River, this scenic park showcases the best-preserved earthwork fortification of the Confederacy. The earthworks were attacked seven times by Union ironclads but did not fall until 1864—ending General William T. Sherman’s “March to the Sea.” Visitors can explore the grounds with cannons, a hotshot furnace, bombproof barracks, palisades and more, while a Civil War museum contains artifacts, a video, and a gift shop.

Fort Pulaski National Monument
https://www.nps.gov/fopu/index.htm
A Turning Point in Military History: For much of the 19th century, masonry fortifications were the United States’ primary defense against overseas enemies. However, during the Civil War, new technology proved its superiority to these forts. The Union army used rifled cannon and compelled the Confederate garrison inside Fort Pulaski to surrender. The siege was a landmark experiment in the history of military science and invention.